Reflections On 25 Years With PCC 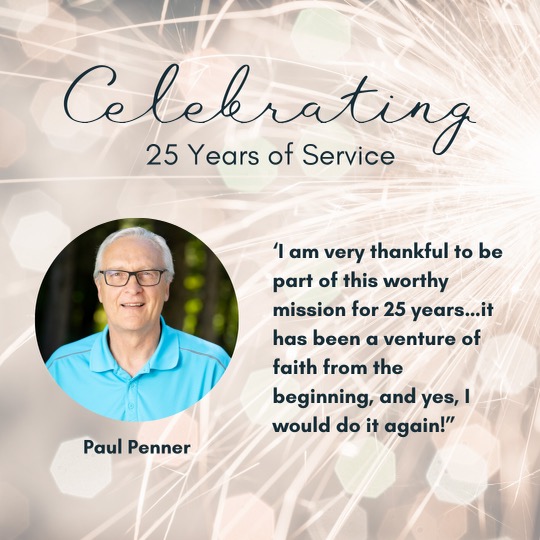 At some point in the story of Pembina Counselling Centre, my role was just an idea. When we first opened in January 1993, the Board believed the PCC Brand was needed.  Because we started so small, the Board assumed an operational role which they hoped they wouldn’t have to bear long.  If the community responded, and PCC grew, they would hire an Executive Director. The community did accept the PCC brand and the time soon came to recruit.

Four years later on September 2, 1997, I started as Exec Director, and at that time, PCC could only afford four days a week.  When activity levels warranted, hours would be expanded, which happened quickly. From our humble beginnings of 400 filled appointments in 1997, PCC has grown by nearly 1000 percent.  The Board let me run with their vision and it has worked well. I, alongside others, have gotten to be a part of a mission to walk alongside others, not just for the moment but for the long term and this has been good.

When I look at my life, I see how experiences and academic training were not insignificant, but helped prepare me for counselling as a career.  In the big picture, I can see that God has helped me and helped PCC help others. Over the years, so many ‘coincidences’ have occurred and made a difference… God has had His fingerprints in my life.

When people see me in the counselling office, the first thing I want to know is what troubles them, what brought you here? People need to feel acceptance and hope no matter their situation. That’s where I (and you) can come in.  I want to feel with people, I don’t want them to feel alone, it bothers me when they are in distress. And I look for hope (I believe there is hope) and choices (I believe there are choices) that they can make in their circumstances which are good for them.

I am so grateful that PCC branded itself around a vision and mission to restore individuals and relationships and offer a faith-based context for helping. Being a Christian not-for-profit ministry rather than a business, we have faced a lot of challenges such as no government core funding.  This would have to come from clients, the community, and God’s help as we sought to grow within the community.  It is with gratitude that I have gotten to be a part of all the ups and downs involved in building trust in the community and offering help alongside my team that empowers people.  What a journey!  Hopefully clients have experienced what we aimed for… being a safe place to gain direction and find hope.

Thanks to the many volunteers in the office and at the Board level who supported PCC and give their time because they believed in what we are doing. Thanks to the staff who value being a team on a mission.  Thanks to the community for investing into the lives of others through what we do.  And thanks to those who have given us the privilege of walking with them on their journeys.

I am very thankful to be part of this worthy mission for 25 years… it has been a venture of faith from the beginning, and yes, I would do it again!

50 Summers of Goodness and Love

Let Me Tell You A Story